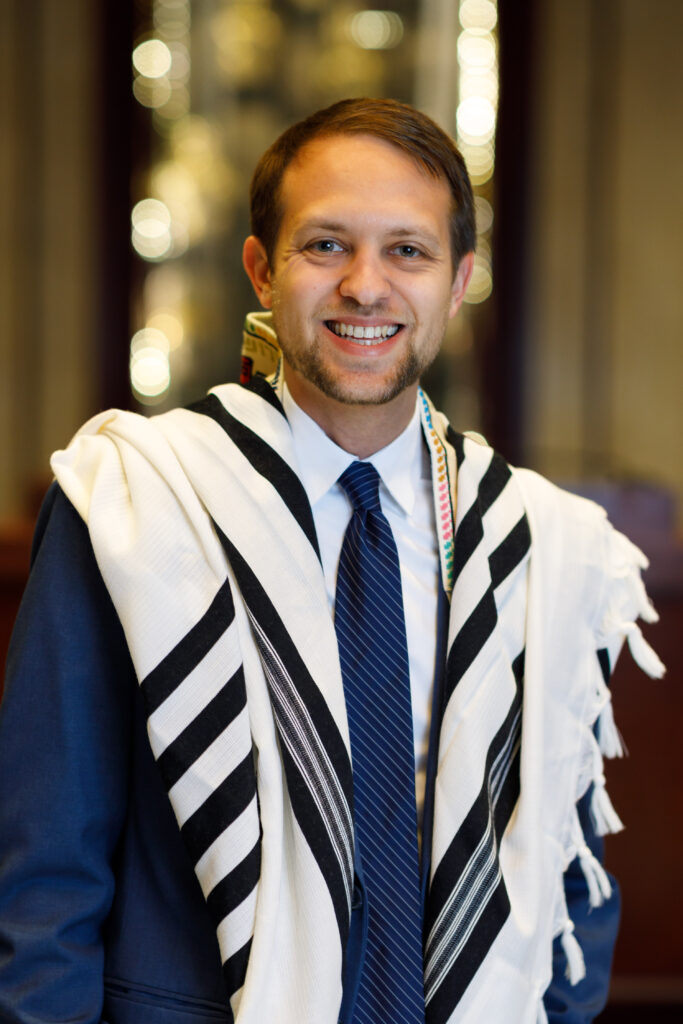 Rabbi Gabe Cohen and his wife Deb are overjoyed to be joining the Temple Emanu-El community.

Born and raised in nearby Hillsdale, New Jersey, and a Jersey boy through and through, Gabe is a graduate of Rutgers University (Phi Beta Kappa) and is expected to earn his rabbinic ordination, masters degree in education, and a certificate in pastoral care, from the Jewish Theological Seminary in May of 2022.

Rabbi Cohen spent his whole life involved in the Conservative movement. He is a graduate of the Solomon Schechter Day School of Bergen County, was transformed by his experiences in USY, and loved his year as a participant on the Conservative movement’s gap-year program in Israel, Nativ, so much that he went on to staff it after graduating from Rutgers. Rabbi Cohen’s rabbinic path was greatly influenced by his eight summers spent on staff at Camp Ramah in the Berkshires. Camp will always hold a special place in Rabbi Cohen’s heart, especially because that is where he and Deb met while they were both on staff together.

During his time as a rabbinical student, Rabbi Cohen worked as a rabbinic intern in a variety of communities throughout the New York/New Jersey area, including Temple Emanuel of Woodcliff Lake, Congregation Sons of Israel Nyack, and United Synagogue of Hoboken. Rabbi Cohen also worked for two summers at the Educational Alliance NORC (Naturally Occurring Retirement Community) providing spiritual care to seniors during the pandemic.

Rabbi Cohen brings his love of Jewish life, culture, and humor to everything he does. He has a passion for making Judaism feel accessible and relevant in the lives of those he teaches.

Rabbi Cohen’s wife, Deb Pollack is a graduate of Barnard and the Davidson School of Jewish Education at JTS. She is in her final year of social work school at Wurzweiler. She loves decorating their home with pomegranate decor, keeping up to date on the latest trends in Jewish food, and baking her award winning challah and mandel bread for friends and family.